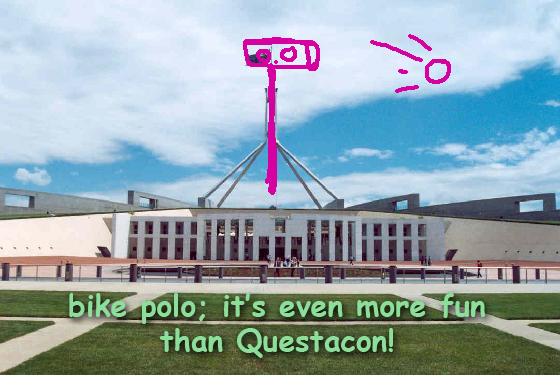 An idea had been brewing for a while. The date was set. Polo was played. Fun was had.

Bike polo in Canberra (aptly named the “1st Royal Mallet Regiment”) has been like a booty call contact on you phone. Been happening on and off for a while, but only really happens when enough interested parties are feeling ‘it’ at the same time. For the last year or two, a few Canberra locals have been getting together every month or two but at a very casual, informal basis. The passion and fun were there (credits due to Steve and Tea for putting in the hard yards!), but the stop-start history needed a burst of energy to really take off.

Canberra is what one would consider to be the perfect city for polo. It’s got plenty of space and facilities, superb cycling paths with relaxed car drivers, a young population that includes two large universities, a great sporting tradition including track, mountain and road biking and that little special ingredient of generally being a quiet town. There’s a small issue of it being cold, but when you’d compare it against Seattle and Vancouver, the two big cities to lift the game out of obscurity, its like a tropical island. Just during pick up a number of passer-bys stopped to have a game, a great sign of potential.

So you can imagine Sydney’s excitement when we were invited down by Beth and Tom for a day of casual pickup to help breathe some life into the club. Beth has recently moved up from Melbourne and giving it a great kick-start with the old Adelaide veteran Tom who many of us knew for a number of years. This city had a great start and its future is looking bright (sorry for the corny line, but its true!). It’s close proximity to Sydney is a great advantage to both our clubs, and we are happy it’s got such a great bunch of players involved. We are eagerly awaiting our next session!!!

For further info, check out the 1st Royal Mallet Regiment’s Facebook page or see them each Sunday at their new court at Ainslie School on Donaldson Street, Braddon.